We anchored up and stayed put in beautiful Bequia for the best part of a windless week.

Controversially it is one of 3 places in the world where whaling is still permitted. 4 whales a year can be killed. An aboriginal law is used that upholds the heritage of the island. It would seem to me that these days tourists provide a more sustainable income for the island & the container ships bring in food that can’t be grown on the lush island, but then I don’t sit on the whaling commission….

The model whaling boats at Sargeants model boat shop are a sight to behold. Harry was mildly disappointed the models don’t sail or hydrofoil like his Grandpa’s though.

Our neighbours in Port Elizabeth were friends from Grenada. “The red boat” Nomadica with gorgeous Cheryl and Morgan one side & the “SAGO” family the other side, which was perfect for Halloween action. A resident turtle also paid us daily visits and sprat flung themselves into our dinghy desperate to join the party. 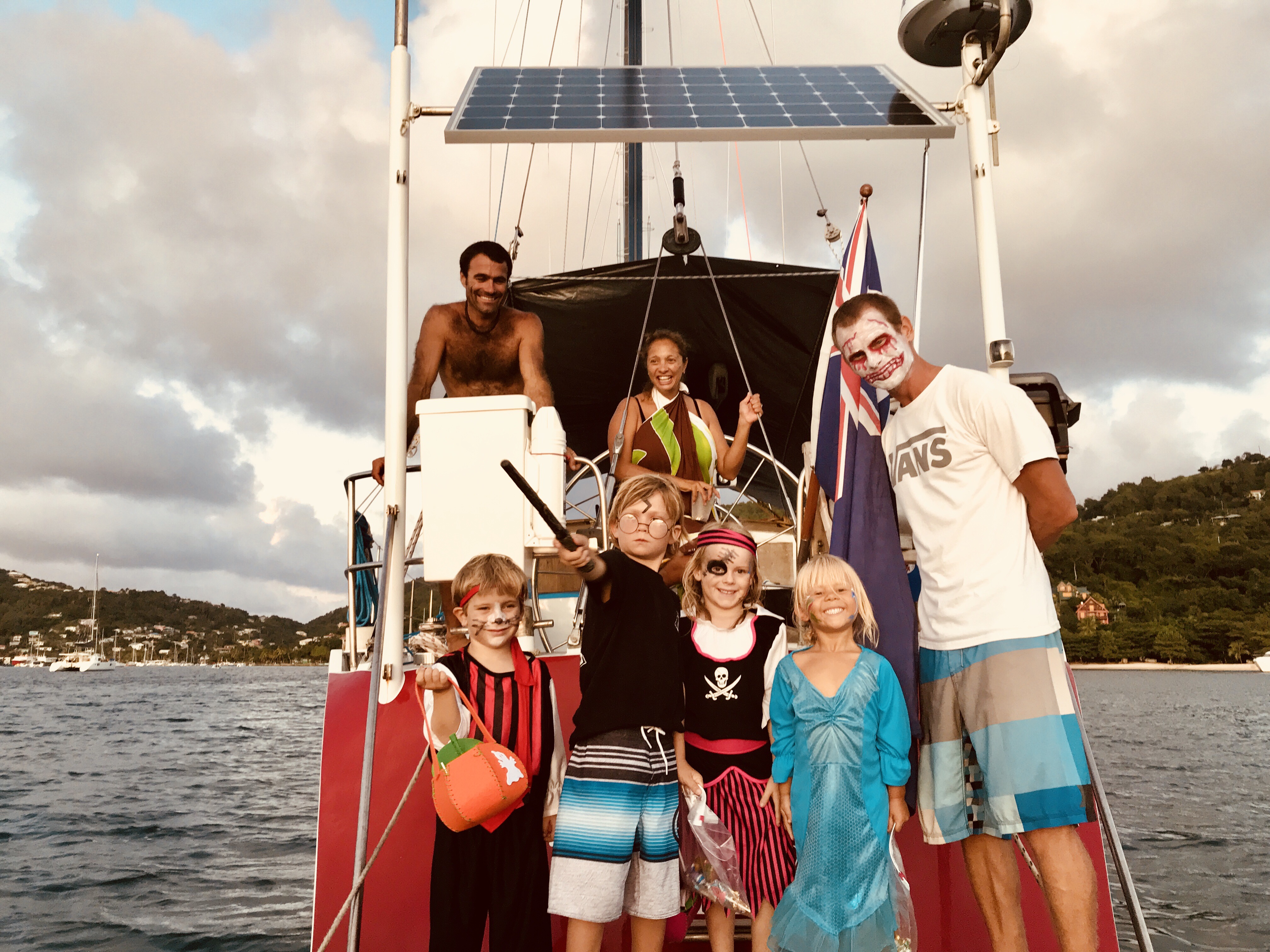 Dinghy issues this week were sorted by a local legend & chaps made up at Grenada sails. Hopefully this will extend the life of our dinghy, assuming I don’t let it float away again!

I pulled myself out of slothsville and took on a few runs on some hilly terrain across to the other side of the Island (no it isn’t a big Island). I might have stalked a French couple and joined them for their run one morning…such a weirdo. I appreciated the company even if they didn’t.

Going ashore at Port Elizabeth we were met by a walkway full of vibrant colours. Laid back sellers on a small stretch don’t force their wares on you. A unique bunch of bars and cafes littered the waters edge. The kids were partial to the ice cream at the Gingerbread hotel & cafe, and were pretty taken with the parrot at the next door dive shop too.

If you continue on past the Beach hotel up & down streps on the side of a cliff you reach “Jacks bar” on princess Margaret beach. We were anchored just off here. Our true find was at the far end of the beach where “Len the Lion” will cook the meat you bring & seat you for $5EC a BBQ use. His beer somehow tastes even better! We had a great Friday afternoon here with fellow cruisers. 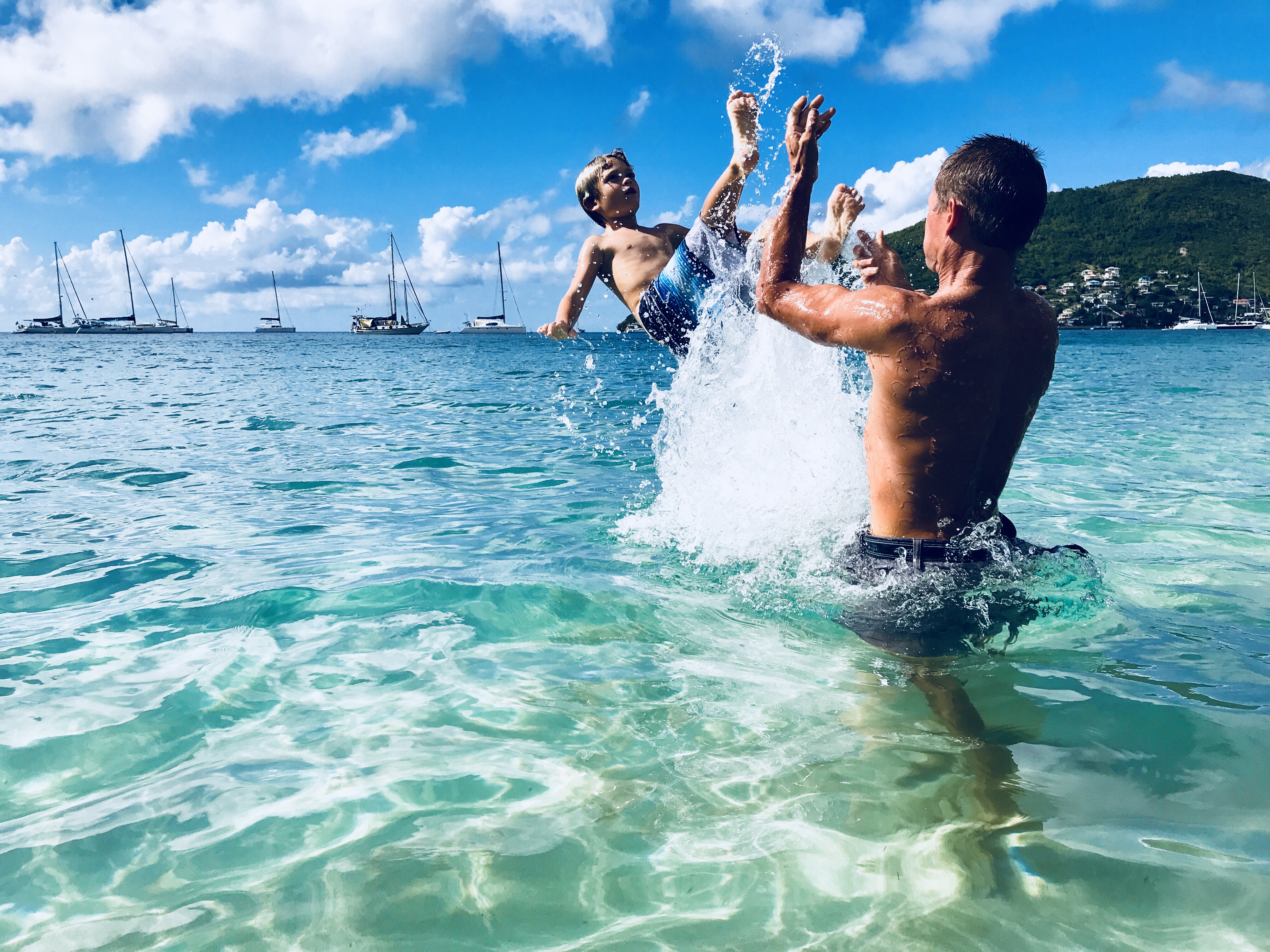 I took the whole school of Draper on 2 trips this week. The avid marine biologist took notes and asked Mr Orton King a million questions at the Turtle sanctuary. He was particularly confused as to why you’d take baby turtles from the beach if they weren’t ill. Mr.King explained that his aim was to increase dwindling Hawksbill numbers. 20% of his turtles survive to be released by 5years old or when he deems them large enough to survive. In the wild only 1 in 3000 survive to 40 yrs old. Not really comparable stats but Harry was satisfied this is a good thing to do. The larger turtles kept in small tanks were unable to fend for themselves in the wild and so would stay at the sanctuary and be scrubbed once a fortnight, be gawped at by the likes of us and continue on a diet of canned tuna for life. 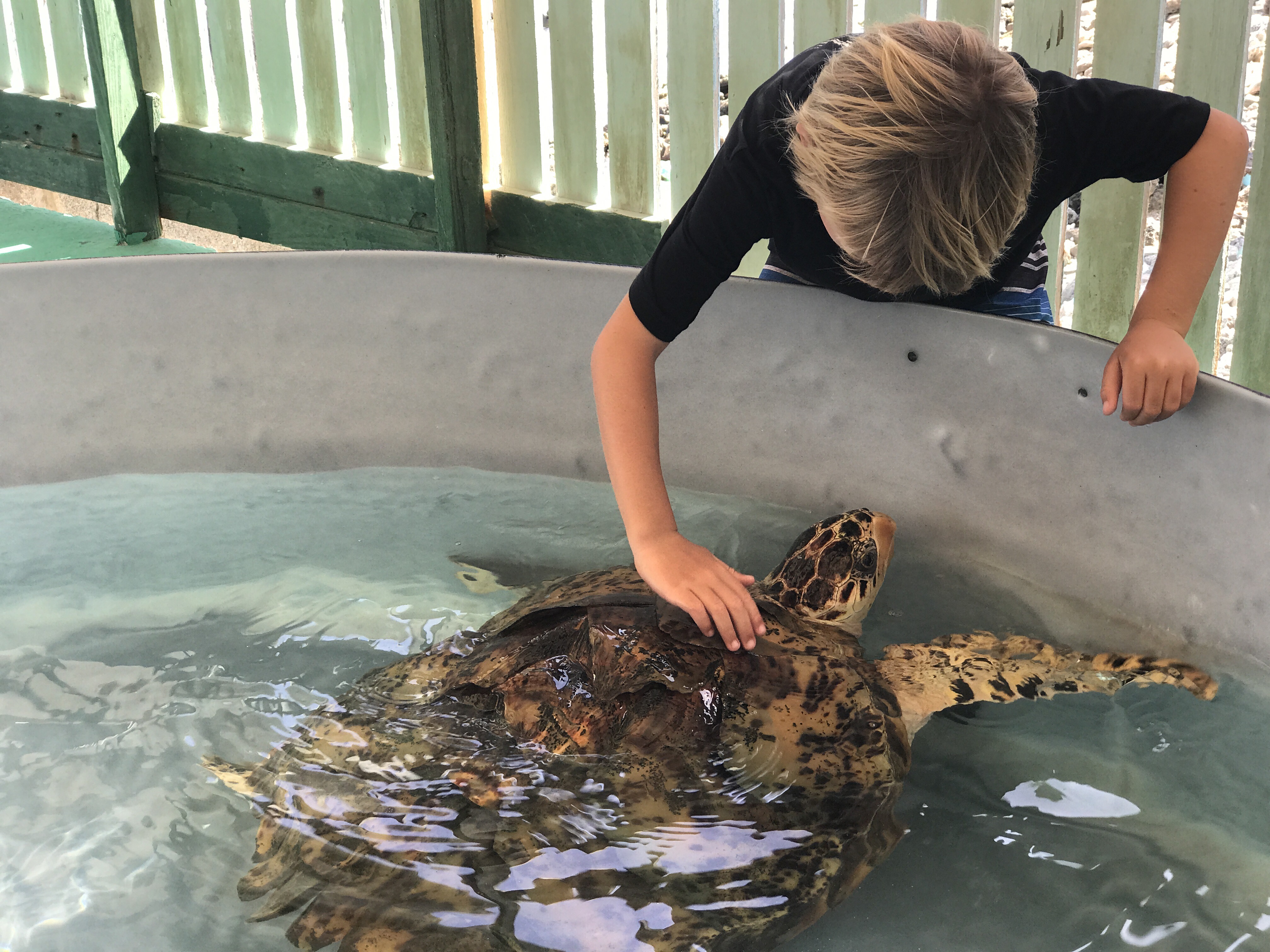 The other trip was to the Firefly hotel and restaurant. Ok so the drinks were pretty good! I promise the kids learned a thing or 2!! The hotel is on the site of an old sugar plantation but now grows a variety of fruits etc. Our personal tour kept the kids interested for 45mins (better than I ever manage). We munched on whatever we could try from passion fruit to star fruits and a lot in between, but the best was pulverising our own sugar cane and drinking it- yum. 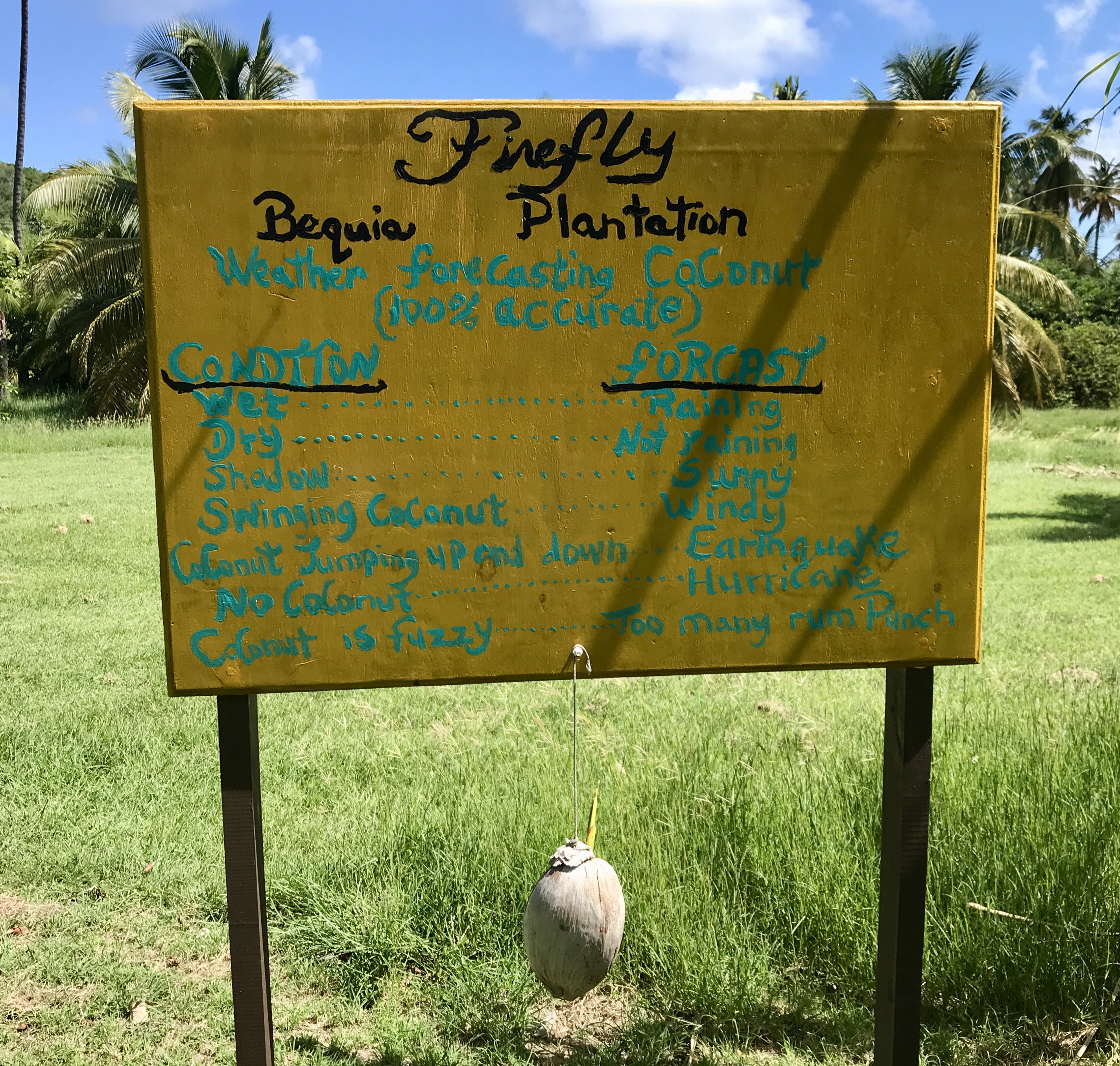 Humidity seems to have dropped a tad in the last few days. Yesterday we headed north in a very civilised 10-15knts passed St.Vincent and towards St.Lucia. The wind then crapped out repeatedly & unsurprisingly we ended up motoring upwind for a while. Our aim was to anchor at Rodney Bay in the north and explore. We had been keen to visit the reknowned Pitons in the South, but a spate of boats being boarded at night and robbed had put us off. What actually happened was that it got late and we decided to push onto Martinique as the wind picked up!

So we woke up this morning in St.Anne’s near Le Marin after a 16 hour crossing. We’ve made the most of the play equipment and paved area ideal for skateboarding just off the dock. There may have been a croissant or two consumed and a post carb slump has occurred. A pretty different day to running the New York marathon this time last year! Miss you Lorna. 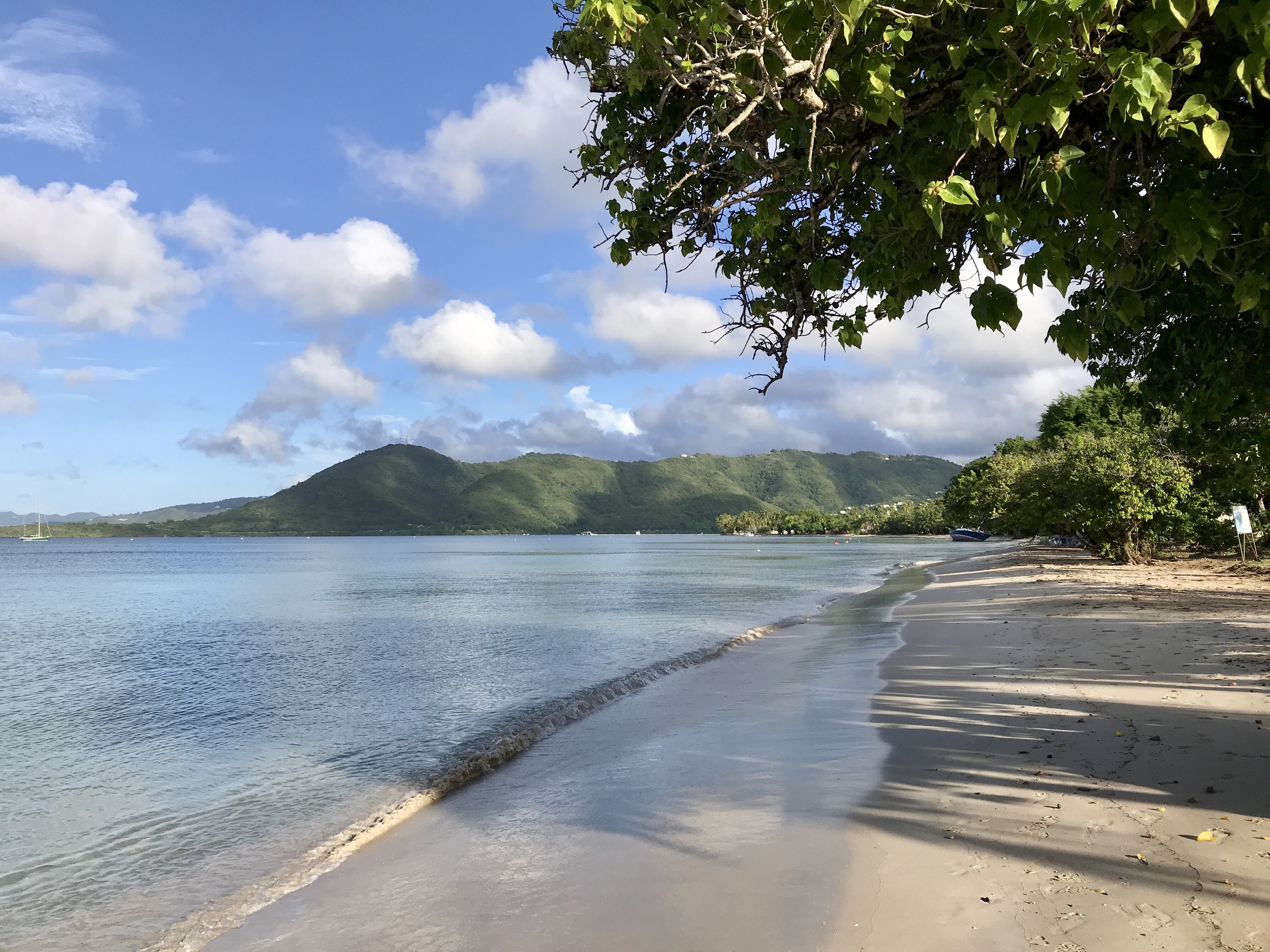 It seems time is cranking on and we’ll be having a Christmas knees up in Antigua before we know it!