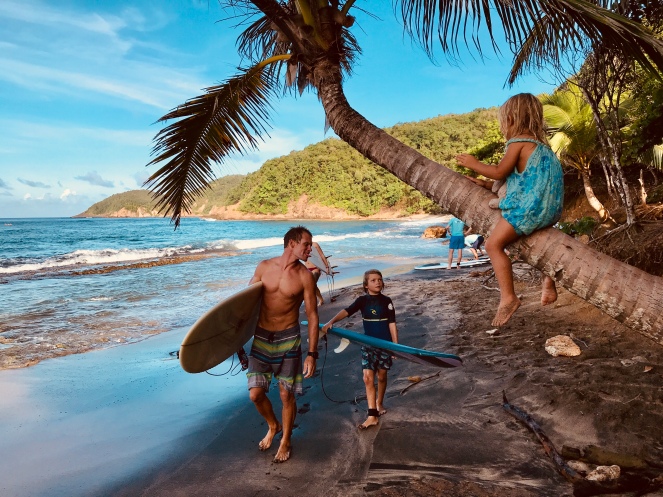 We’ve spent a fair amount of time up on the North East coast of Martinique in the last 10 days. Basing the boat in St. Anne has meant we’ve had the chance to catch up with our friends on Nomadica and meet more boat families.

Tartane had a big swell last tuesday and Chris got the best of it. We then had a cracking family night in Decathlon and Bricolage. The kids were beyond excited to be in a store with the possibility of purchasing anything, it was like we’d taken them into a free candy store. Consumerism isn’t dead it would seem and a beach football was the best thing ever.

Chris had quite the adventure off surfing back up at Tartane on the wednesday. In his eager rush to get in the waves he hid the car key behind a curb, apparently he took note of a nearby crab hole but didn’t think much of it (Who still leaves their keys by their car on the beach by the way?!). A few hours later he came back to no keys but a crab poking itself menacingly from its hole. A wrestle ensued between Chris and crab, with eyes on the prize of key treasure. Chris allegedly won the tussle but after an hour and half of digging all crab holes in the vicinity he admitted defeat and rang the hire car company on a fellow surfers phone. Some 2 hours later a spare key was delivered from 30 miles away, at the potential cost of 400 euro! Meanwhile the kids and I had entertained ourselves on the boat all day with no tender. Fortunately “A-car” hire company in St. Anne were legends and have waved the fee, probably on account of the ridiculous story- use them if you go! 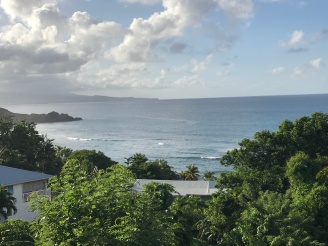 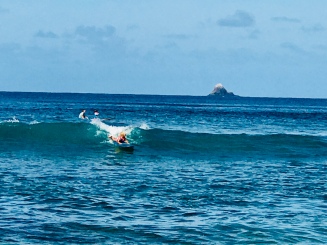 Complete with new hire car, the whole family headed back up to Tartane at the end of the week. Harry got some great overhead waves and Lily, bored of waiting her turn, became quite the beach diva and was convinced everyone was just showing off. There were some seriously good surfers out including a local boat captain called Virgile from Le Marin. We also discovered Cocoa Beach restaurant, which is famed for its yummy food and setting.

Last week I finally made it out on my first long run in what feels like a lifetime. Having convinced Morgan (S/V Nomadic) to come out running with me, we discovered a beautiful trail round the south of the island and towards Anse Trabaud. We coursed beaches, across salt flats, over rocks that looked like the moon and then ended up in what looked like Beachy head in East Sussex! I best go and do it again as I didn’t take a camera!! The day got better as the kids went to play on another kid boat for a few hours. Thank you Rhonda and S/v”Party of 5″ for having them! I realised its been a few months since the kids have been anywhere without us….

Harry and I took his friend Quincy out knee boarding and skirfing much to Harry’s delight. So good to see the kids hanging out. They are reluctant to try and speak with French kids at the moment but will attempt French in shops, particularly if croissants are involved! Hats off to all the amazing kids we’ve met who speak a number of languages. We might have to tap up the duo lingo app. 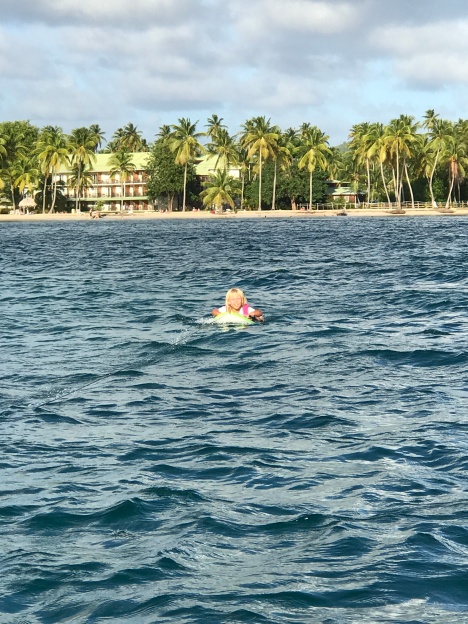 Courtesy of Virgile, Chris was super fortunate to get the opportunity to go sailing in one of the local boats last weekend. The “Yole” is a one design boat of the Caribbean, we saw similar boats in Bequia too. This boat had 5 wooden outriggers that you need to tack over, the rudder was a big oar and the best technique involved a massive turning motion. The kids and I watched eagerly from the wooden chase boat. With minimal breeze around the chase boat driver got a little bored and started circling the yole at pace, creating a decent wake with  the predictable outcome of capsizing the boat! Turns out its a full mission to right one. A tow to the nearest beach was needed to empty the nearly sunk boat and get the rig back in! This gave plenty of time for the wind to fill in and for Chris to have a go on the helm. Great morning out and the kids and I were suitability jealous. 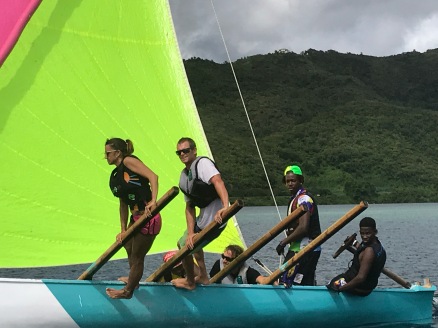 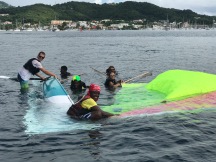 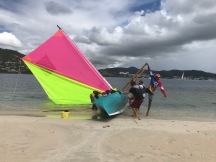 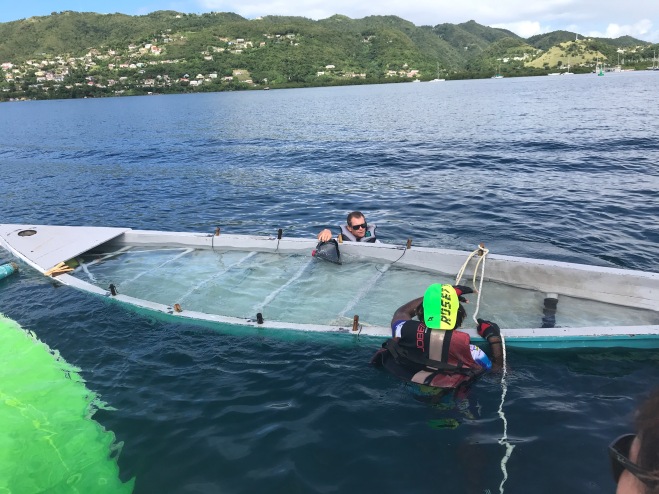 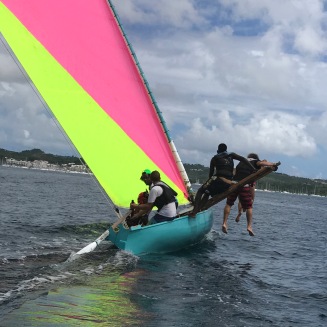 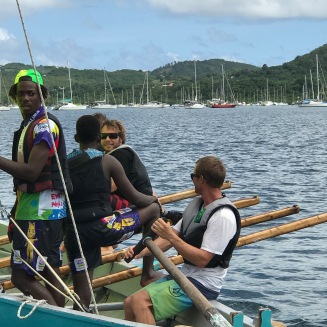 Harry cracked out his Hawaiian sling on a mission to save the planet. Seems counterintuitive but he caught two lion fish. They are a venomous invasive species of fish. Harry tells me that whilst they are pretty stunning not only are their spines deadly, they are also responsible for eating truck loads of reef fish. With few predators they reduce young juvenile reef fish populations and have a negative impact on the coral reefs by eating the important grazers and cleaners of the reef. The reefs are fragile enough and there is a big drive to cull them. 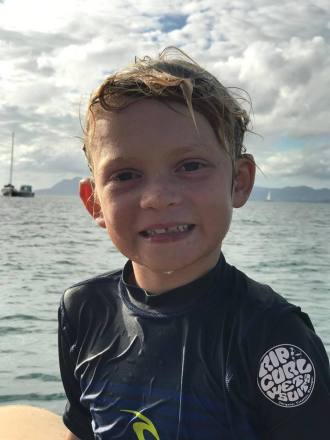 The call of the waves resumed on sunday and we had very relaxed 4 hour run along the coast with the kite up. We headed 4 miles past Saint Pierre on the North West coast to 3 right hand points around Le Precheur area. Not enough swell the afternoon we arrived but the black sand beach hidden under the rainforest was a sight to see. Just off shore we found a reef teeming with life and ready for us to snorkel until dusk. 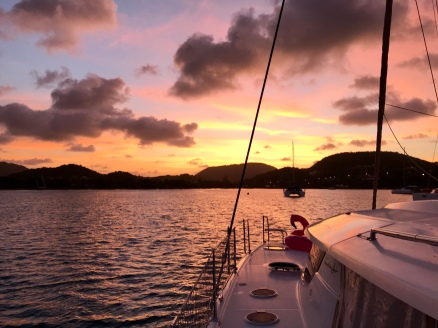 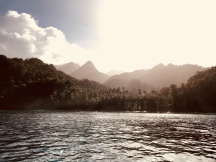 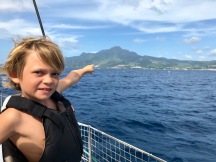 This week we’ve hung out with new friends and are patiently awaiting delivery of some gucci batteries and a solar panel (feel like I’ve been saying this for weeks). It is slightly delaying our journey north but will be worth it we hope. We woke up on Wednesday and made the split decision to head to St. Lucia for the day, as you do! Our main purpose was to fill up with gas. We have the wrong kind of tank for exchange in Martinique and couldn’t source anyone to fill our US style tank, plus a little explore is what we like. I think we could name ourselves uncruisy cruisers the amount of random miles we log. But hey, just like life on land you got to do what’s right for you. There are definitely a lot of ways to skin the proverbial cruising cat. 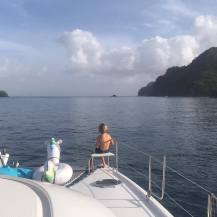 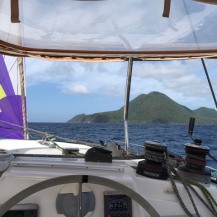 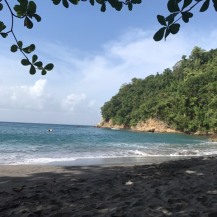 Rodney Bay was our destination and a mere 4 hour downwind sail away. There were approximately 10 boats moored up in a pretty bay with pigeon Island and beach at one end and a few hotels further down the beach near the marina entrance. Chris got a surf in at a decent sized wave, of which we’re told there are plenty of. We also saw an actual shopping mall which slightly blew our minds. We came away with mozzie repellant for a friend! 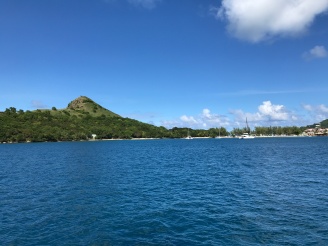 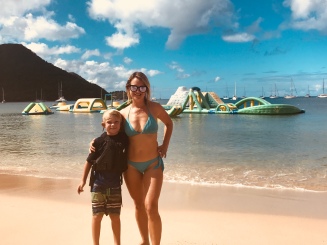 Before we dashed back to Martinique for a dinner date, Harry and I squeezed in an epic morning at Splash waterpark. This was not the rare morning to have lathered myself in cocoa butter; I was as slippy as a new born baby in the bath! Awesome fun had by all, I won’t be signing up for ninja warriors anytime soon though. Sadly Lily was too young (and short) for the park, much to her disgust. She had to make do with hobie sailing with Chris. She bossed the helming which was fab to see.

We had been reluctant to visit St. Lucia after a number of reported boardings/robberies of boats in the far south. However, after our quick visit we’ll definitely be back and yes we just might take care after dark (as we would anywhere). Just before we left a local said I’d love the event on the friday night and must come back apparently its “Strip night”……she’d only met me for 5mins so her judge of my character was a concern! Turns out she was referring to the area of the town the party is in…

3 thoughts on “The Great Crab Robbery….”