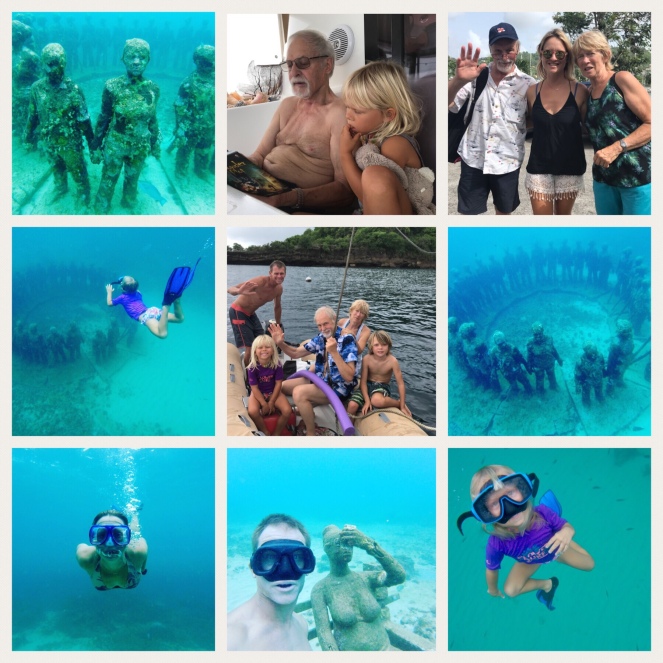 So the parents left but not before we had the chance to enjoy the underwater sculpture park. We then found a few slices of heaven up north at Petite st Vincent & Mopion. I may have also accidentally lost our kitesurfing board which was a little average! 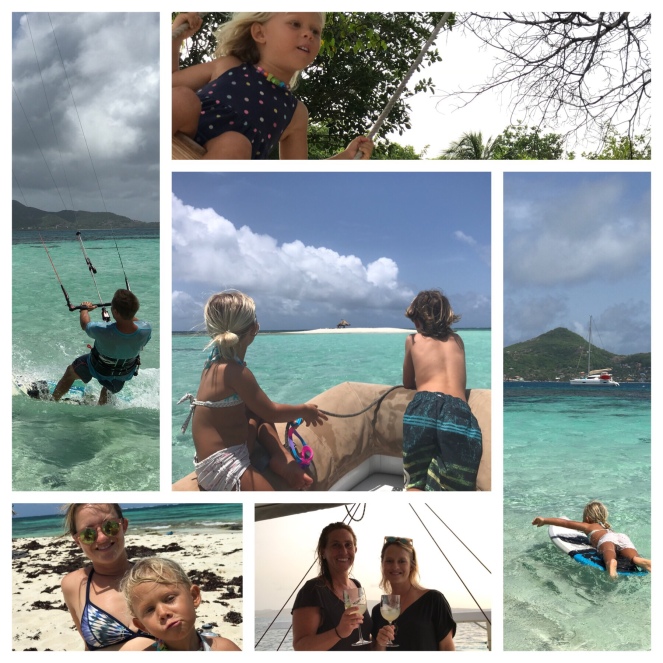 This last 2 weeks the realisation that we’re off to the UK has set in & we’ve jumped into relocation mode. Just before Chris’s last trip we managed to squeeze in a meeting with a local yacht broker. A reputable company with a good name they wanted 10% of the sales price in commission. We also wanted to offer a broker friend of Chris’s in Oz the opportunity to market it, as they’d given us so much help in the lead up to our trip.

Whilst we waited to look at their contract I decided to get pro-active & advertise our home privately on boats.com and fb. Within 24hours we received an acceptable offer for our gorgeous home! It remains to be seen if the offer will go all the way, but a survey & lawyer are booked & we’re ploughing on HD yacht broker style with plenty of interest still coming in.

Not so smugly we also dragged anchor for the 1st time this trip. Obviously Chris was away & I happened to be visiting friends in another harbour-doh! Fortunately the cruising community has each others backs & our neighbours contacted our friends on “party of 5” who got hold of me. Travis & Matt kindly helped me re-anchor. This time there was no scrimping on chain & we threw out 6:1. Mini- drama averted & everyone was happy.

One of my best friends has joined us hot after navigating around the world for the second time in the Volvo ocean race. Whilst she is a racy number I think life on board “Fille de Joie” may be a little different, although she may be missing freeze dried after a few days of my food. For the whole of day 1 Lily was also quite literally attached to Libby’s hip. Some classic Lily quotes included “Have you done any sailing? I can show you what to do”.

We’ve also taught the kids a few new words in the lead up to UK life they include “blazer” and “shoes”. Alien concepts both. It turns out though that they will be in the “pirate tribe” at their new school, which is fairly apt.

Harry’s been perfecting his turns on our local mini-wave in Prickly Bay and he & Chris have been getting some good double rides of the “Minty B”.

We made another mini-gaunt back upto the Grenadines this week. First stop was the empty anchorage of ile ronde, where Sv”Entelechy” were greeted us. Some donuting and Lily’s “bestie” 15 yr old Gaia kept the kids entertained until dark. A reef snorkel gave us some great finds.

A long beat up wind took us onto Frigate Island. It’s a spot that ticks all the boxes for us. Flat water for kiting, few boats, great snorkel potential, a den on the beach & lots of shells which Lily loves to arrange. A action packed day of oppie sailing, Lily getting up for the first time wake surfing, more successful kiting without loosing any boards, snorkelling with spotted eagle rays, a million starfish, squid & cool trunk fish. All shared with friends on “Entelechy”. Having created tired kid bombs we then pushed our luck a little further with a rare dinner out round in Clifton, Union Island. 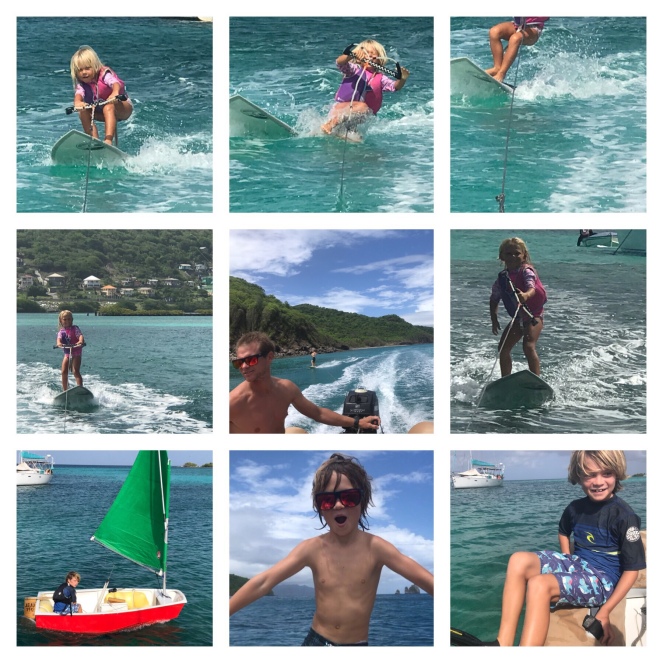 After a relaxed morning in Clifton we reached over to Mayreau being reunited with Pablo & the multi-talented woman of the sea, Elvira-If I were a fish I’d be terrified of her. Fickle wind prevented much kiting but a fab reception in Salt whistle bay from special friends on Sv “Nomadica” and the original pirate ship of “Marie des Isles” who we were pleased to see were unscathed after a mild skirmish with the first hurricane of the season. 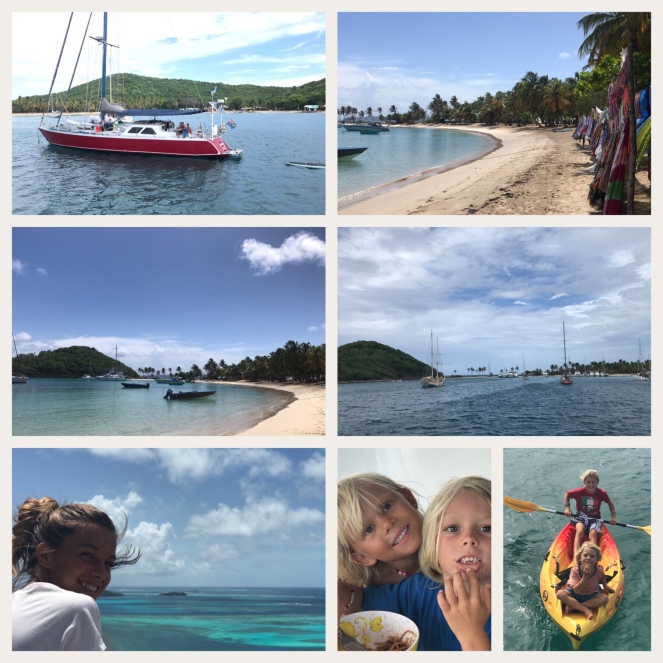 One morning there was a hubbub in saltwhistle. Right around the time Harry decided to swim over to see his friends on “Marie des Isles”. What he didn’t envisage was the fishing net which he became encircled by! Without freaking out he swam on & over the net to his destination, hopefully not too concerned by whatever was being caught! Just another morning for a boat-kid.

We had a magic few days up in Tobago Cays swimming with more turtles than you can shake a stick at & snorkelling around a few islands and a great gaunt over a reef to see a wall that fish woman Elvira had found. Again cruiser friends turning it on with potlucks on the beach and lots of laughs.

An impromptu “kite camp” then unfolded in Frigate Island with a hoist of cruisers giving it a try under Elvira & Morgan’s instruction. All of us were blown away watching a local guy called “Pokemon”. The tricks this guy choreographed were insane! 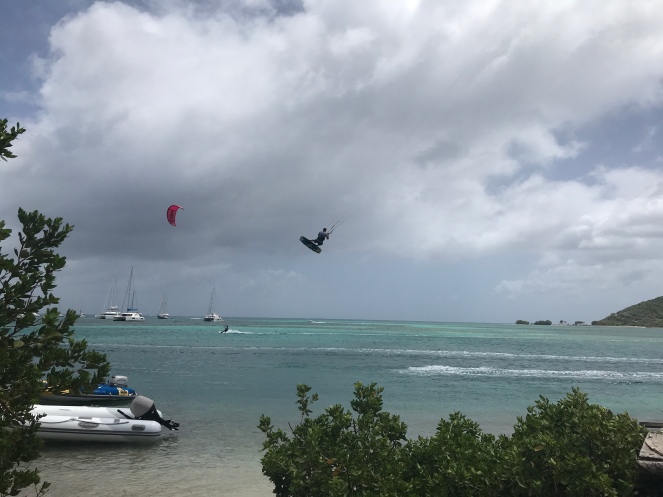 Before play time was over we managed to take Libby to the marine sculpture park back in Grenada. 12hours of biblical rain brought playtime to a abrupt end as we dropped Libby off for her flight home. We had a week to get packed & ready for survey. 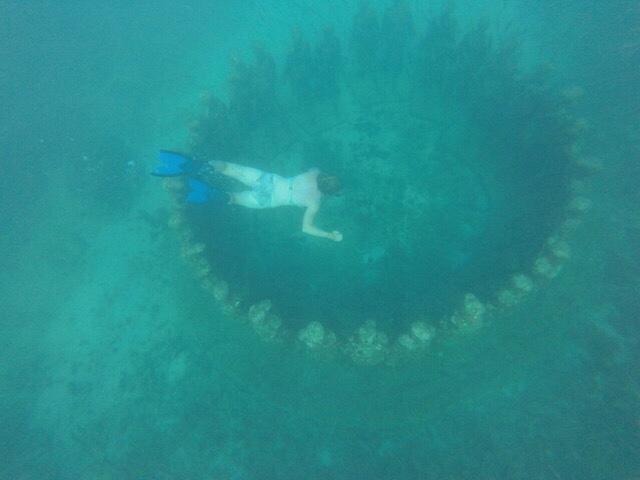 There is definitely a background of low grade stress stirring up on “Fille de Joie”. (Ok it’s been fever pitch at times). Waiting for lawyers to communicate over the boat sale is driving me slightly batty. Finally with 2 awesome Brit lady lawyers now on it we are getting sorted. I think we’re getting the 11th house set up since Harry was born which is slightly scary….maybe there’s a reason “No roots” is my new favourite track??!!

For some reason I’ve begun to care about what paint is on the walls, what furniture I will park my rear-end on, what car is right for us. All material stuff I’ve really enjoyed not caring about! Oh & then there is my “school” fear – the gates, the school run Mums, the overscheduling & all things kid related that us Mums love to stress over…..

For the moment we’re holding on & squeezing every pleasure from our last weeks aboard.